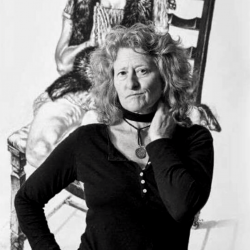 Diane Victor was born in 1964.  She is a renowned South African artist whose works remain a poignant visual centrepiece in our modern times.

Victor’s list of accolades is a tremendous as her body of work is.  And this is simply because of her powerful work and necessary voice.  Throughout her works, it is apparent that her humility speaks for the underdog.  She places ideas in alternative perspectives, and invites the viewer to acknowledge alternative ways of being and seeing.

Victor’s work exists in a sphere of black and white.  And as striking as these are, it is the textural meeting of the two that demands attention.  It is the constant teetering between the binaries, and she masterfully encapsulates this moment in the whispers of soft detail that contrast the hard lines of the artworks.  This binary extends to the interpretation of the work; from the satirical scrutiny of ideological constructs to the role of the woman’s role in society.    The idea that there are always two sides to every truth and only one that is heard becomes questionable, as Victor encourages the viewer to look at their world from every perspective.  In this way the alternative to the norm is offered, and it is in this that perceptive shifts may be undertaken.  It is said that artists cannot change the world, they can merely present it may hold an element of truth, but the representation of reality is the eternal starting block to change.  The decision, essentially, lies with the viewer themselves.

Victor is constantly experimenting with new ways making marks.  This textural decadence is always surprising, as the viewer does not know what to expect next.  From the marks made with fire (through burning candles, books and money) in her Burning the candle at both ends series to the marks inspired by a stained ceiling in the Stained gods series, she redefines what it is that an artist needs to create art.  Her current experimentation with stone and light is again a dualism that embodies the hardness of reality, and the light exists despite of it.

Her voice, that of the logical black and white of being, resonates in the art that she produces.  Victor does not present slogans – she creates works that subtly urge the viewer to reconsider their views on everyday living.