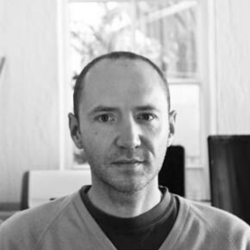 Frederik Eksteen completed his Master’s degree at the University of Pretoria in 2000. In addition to exhibiting both locally and internationally, he has won several awards including the Judges’ Prize in the Sasol New Signatures competition.

Inspired by the interface between digital technology and traditional oil painting, Eksteen’s art is visually complex and conceptually layered, often referencing art historical traditions, while simultaneously harnessing new technology. He employs a blend of techniques and genres to speak to the underlying and often hidden mechanisms of images.