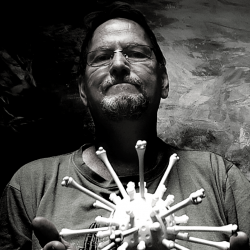 Gordon Froud has been actively involved in the South African and international art world as artist, educator, curator and gallerist for more than 30 years.

He has shown on hundreds of solo and group shows. Froud graduated with a BA (FA) Hons from the University of Witwatersrand, and a master’s degree from the University of Johannesburg, where he runs the Sculpture department as a senior lecturer. He has curated numerous group exhibitions that have traveled the country.

He regularly shows on more than 20 exhibitions a year including showing in Washington, Holland and Paris 5 years ago. He was selected as the first Site – Specific artist in Residence at Plettenberg Bay for 2012 and again for 2013 as a participating artist in the Site – Specific land art Biennale.  Three sculptures were selected for an exhibition of South African Sculpture in the Hague in May 2012, one of which was acquired by the SA Embassy there. He showed at Nirox Sculpture Park and at Stellenbosch Botanical Gardens as part of the ‘Heavy Metal’ outdoor Sculpture exhibition in 2013 and 2014. He is represented in many public and private collections.

Froud curated 2 shows of SA contemporary Art to Appalachian State University, North Carolina and the Biejing Bienalle 2015 which were also shown at Pretoria Art Museum and University of Johannesburg Art gallery. His two- year cycle of work, a solo show of more than 150 new works, has was showcased at the Standard Bank gallery from April to June 2018 as Harmonia: Sacred Geometry, pattern of existence. This show has traveled to various major galleries and museums in 2018 and 2019.

Froud regularly shows on more than 25 shows a year. He is reading for a PhD at the University of Johannesburg.