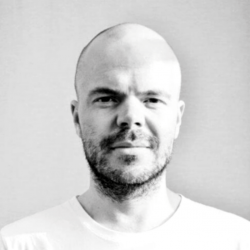 Janse van Vuuren’s work is visually arresting and it leaves the viewer with an emotive response that permeates through them.  His technically apt figures become the canvasses that he plays upon – he adds mundane objects and marks, he takes elements away.  These culminate in works that are imbued with nuanced symbolism and meaning.

He adds layers of meaning, and the figures become shrouded in them.  These elements, which vary between the mundane and the more significant, thus become entwined in the figure’s purpose and interpretation.  There is an element of experimentation that heightens the work, and Janse van Vuuren pushes his art beyond the expected to create the unexpected. From the cluttered bases that ground the figures to the objects carried that become their glorious burden, the artist demonstrates the idea of acceptance.  It is the notion that the self can only truly be defined when every part that shapes our becoming is accepted.

The works reverberate with a tongue in cheek playfulness that lends itself to black humour.  The figures essentially become playthings that shift with the social scenarios and emotive landscapes that they exist within.  He experiments constantly, and explores alternative ways of being and becoming as a result.

This playful approach to the more serious ideas that he explores (the individual in society, the impact of the past and present on being and the scattered moments that ground us and become our burdens) is inspired by his children.  He is intrigued by their honesty that exists without filters, and the voices that are seen in their stories and art as a result of this.  This honesty can be interpreted as the closest that we can come to truth.