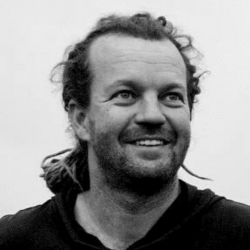 His work is provocatively stirring, and impeccably mastered.  He works in bronze and wood, and the sculptures that he creates bring the matter to life.

At the heart of his work lies the human being, the natural state of our existence, and our relationship with the world that we are in.  It is this bringing together of the materials that lets it all make sense, that even that which is fixed in the work finds its sense of belonging (even if they seem out of place at first).  In essence, Petrus’ world that he creates serves as a physical reminder that every single object belongs – albeit as a physical representation of who we are, a figurative reminder of who we were or a suggested token of what it is that we may become.

His works also encapsulate the relationship between the urban and the more natural environments that we exist within.  Again, he neither praises nor condescends either:  he merely states it with aesthetic grace.

Petrus’ works are unique, and are meticulously crafted.  The details (such as small army men in a tortoise shell or a skull’s mouth or a bar of soap balancing on a table) bring a playful edge of enjoyment for the viewer.  Their meaning does not go by unnoticed, if anything it becomes highlighted.  His art is fresh and it fills the viewer with adventurous wonder.